Apple announced at its annual Worldwide Developers Conference 2017 a suite of news features for iOS 11 that will surely be welcomed by its loyal users. For mobile advertisers, this update doesn’t bring all bad news, there are also some exciting new potentials for marketers with the latest update. For users, it is all good news, as Apple’s new iOS 11 is putting user privacy centre stage.

Apple unveiled its new Intelligent Tracking Prevention in the new iOS update, which is essentially an ad tracker blocker for its Safaris web browser, rendering browser cookies ineffective for advertising purposes. Put simply, cross-site tracking via cookies in Safari will no longer be possible. Advertisers and vendors that have large cross-device marketing efforts may need to start looking for alternatives. This is not a move by Apple to kill mobile advertising on iPhone completely. In-app inventory remains unaffected and 90% of user’s time spent are on their mobiles are still within apps. Apple is clearly moving to concentrate advertising efforts within the app environment and reduce monetization opportunities on mobile browsers for publishers. Contrary to Google, where the heart of their business is mostly browser based with AdWords.

As mobile pure-players, we see this as the next logical move after Apple’s introduction of IDFAs. Anonymous IDs only available in app that can be linked to geolocation data in the form of X and Y coordinates or user interests via app usage. IDFAs have longer lifespans than cookies, it expires when the users change their smartphone. For publishers, in an audience planning world where data is king, this is a sure sign to start moving their investments and efforts into app channels on iOS.

The new location sharing permissions update in iOS 11 will also be daunting for some app developers and vendors who need to collect location data permanently. Prior to this new version, many apps only allowed users to choose between “Always” or “Never” for location sharing with apps. In iOS 11, it will be 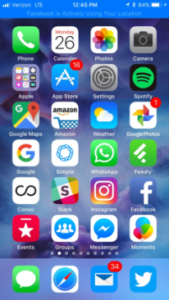 mandatoryfor developers to display a third option “While in use” to users. Apple goes even further to give users more control on their iPhones.

It is without a doubt, when presented with these options, very few users will accept to share their location data continuously. Realistically, there are very few apps that can justify collecting location data continuously in the background. For example, Snapchat’s latest acquisition, Zenly, is one of the few apps that will require users to allow location in the background in order to operate. A forward thinking move on Snapchat’s part. 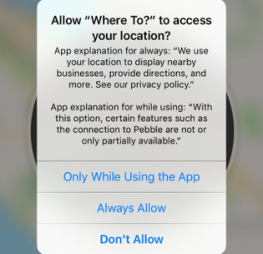 Clearly, Apple wants users to be aware of everything that is happening on their device, what is consuming their battery and data, putting app developers in a position to earn trust from users. Users will also see a blue bar of apps that are collecting location data when not in use, forcing apps to be accountable to users.

Another new feature that may seem disconcerting for marketers is the possibility to keep auto-play videos paused unless explicitly played by the user. Once again Apple has sided with the users to retain its loyal following, this time making life harder for content publishers. For the moment, this new feature will only be on Safari desktop, but no doubt will soon be on the mobile version of the browser as well.

The silver lining for mobile advertisers

Another iOS 11 update that has somewhat gone under the radar is the new QR code scanner that will be native in the camera app. This new move will make QR codes much more accessible for users on an iOS device. QR codes can facilitate data sharing like contact information, ULRs, and even phone numbers – making it much fas

ter than typing. Now QR codes have the potential to be mainstream without the need for additional software, presenting a true opportunity for advertisers. QR codes are already in fashion in Asia and quickly becoming the preferred payment method for most consumers. Advertisers can leverage this new feature to really bridge their online & offline marketing efforts. Consumers can now scan an OOH advertisement and be redirected into a branded digital universe.

So it is pretty safe to assume that Google and Android will soon follow with updates of their own that gives users the same amount of control on their devices. In terms of QR code scanner, the Samsung’s Galaxy S8 camera already has an integrated scanner. Up until now, users have to active the Bixby vision feature in the phone’s setting in order to active it – this has been a barrier to adoption as users were not informed about it. The new Android O, releasing after the summer this year, will include background location limits on apps as well to distinguish apps in the foreground and background. Developers will not be able to collect location data as frequent as before. Another bad news for adtech vendors focusing on background location data. Overall, the iOS 11 update is a sign that the industry is maturing in the right direction. Users are demanding more transparency and getting more power and control in return. The mobile advertising industry will have a long future ahead if we don’t lose sight of the user.

Read the article on mmabloguk.com